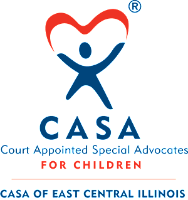 Michael Rosenthal has been a volunteer advocate for three years, during which time he’s worked with five children from two families. He currently represents a family of four children ranging in age from 4 to 14. "I like trying to make sure that kids have a future, giving them a chance to succeed," says Michael of his motivation to volunteer.

Michael does not settle for less than what the children deserve. Through his consistent contact with the children and their foster parents, Michael knew that the 4-year-old boy needed an educational evaluation. He had never been read to and was at risk of entering kindergarten not ready to learn. In a report to the judge, Michael reminded everyone that "this issue was first raised on January 25, 2002, and it is sad that this 4-year-old still is not receiving the educational opportunities he deserves." As a result, the judge ordered all needed services to begin immediately.

From the beginning, Michael has encouraged the Department of Family Services to keep the children together or at least in contact. The two younger Children are now with a family awaiting finalization of their adoption. Michael is directing his passion at this point to making sure the two older children find a permanent home.

Asked about his role, Michael says "I think anybody can be a CASA volunteer. Anyone can find the time it takes to follow these cases through the courts and give these children the support they need."

Charleen DeGross has been a volunteer advocate for about two years, working with one child. The mother’s continued substance abuse had led to her third child, an infant, being placed in foster care. Agencies serving the family saw terminating parental rights as the likely outcome since two previous children were already in foster care.

When the court appointed a CASA volunteer to this particular case, the mother was absolutely against it. But almost weekly, Charleen visited the child, her mother or the grandmother who had custody. As a result, the mother began to realize that CASA was there as support for her too, to encourage her to face her substance abuse issues.

Over a number of months, the mother gradually began to work on her program of recovery. She looked forward to seeing Charleen and was grateful for her advice and presence in the courtroom. She visited her daughter daily, and eventually the child was allowed back in her home under a plan of family reunification.

“It is heartwarming to see reunification take place,” says Charleen. “Spending many hours with a CASA mom and the caseworkers, you become a nucleus. You see the successful results of the entire team’s hard work. A lot of the efforts were based on mom’s willingness to turn her life around. It’s wonderful to see someone go from total despair to happiness.”

Ongoing support is important to enabling projects to continue their work, so we encourage donors to continue to contribute to projects over time. But if you must cancel your recurring donation, please notify us.